HPISD hosted a forum for the community to develop a better understanding of the state's public school funding formula and how the current recapture system, informally known as Robin Hood, impacts the district. The forum took place on Wednesday, Dec. 5, 2018, in the auditorium at Armstrong Elementary School. 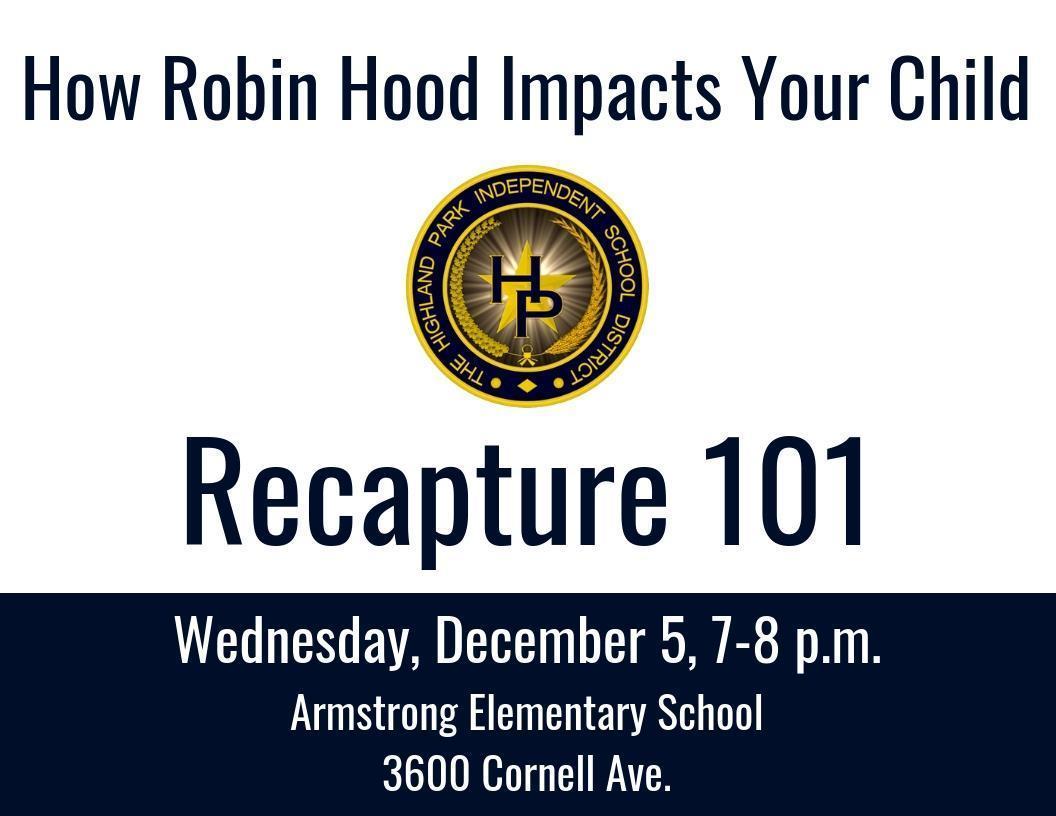 
To learn more, please watch the video of the Recapture 101 forum below. You may also find the full presentations from Christy Rome and Todd Williams linked below.
Background:
Recapture, nicknamed "Robin Hood," is a state law that requires property-wealthy school districts to send portions of their locally collected tax dollars to Austin to be redistributed statewide. By the end of the 2020-21 school year, HPISD taxpayers will have sent close to $1.8 billion in recapture dollars to Austin since Robin Hood went into effect.

Many people ask us which tax dollars are subject to recapture. Our taxes are broken up into three categories:

Several additional questions were submitted by attendees of HPISD’s Recapture Forum held on December 5 at Armstrong Elementary. Below are responses to those questions.

1) If Robin Hood has been named unconstitutional, how and why does it continue?

Actually, the state’s school finance system was declared constitutional by the State Supreme Court in August 2016. The Court said, “Despite the imperfections of the current school funding regime, it meets constitutional requirements." It said that Texas students “deserve transformational, top-to-bottom reforms that amount to more than Band-Aid on top of Band-Aid.” Unfortunately, during the 2017 session, the Legislature did not make any major changes but did ask for the Governor to create a commission to study the issue in the interim. The commission’s report is due to the Governor by the end of 2018. One of the commission members, Todd Williams, spoke at our forum on Wednesday night and provided a summary of where he believes the final report is heading. Stay tuned!!

2) Please explain the difference between Mad For Plaid, tax dollars and bond money.

Mad for Plaid is the annual campaign organized by the Highland Park Education Foundation to raise money from the community to supplement Highland Park ISD’s budget. The goal this year is to raise $1.8 million. Funds donated to Mad for Plaid are tax-deductible and are not subject to the state’s Recapture formula, so they go straight to HPISD.

Assuming that the term “tax dollars” is referring to local property taxes, property taxes are collected in every school district to support local schools. In the case of Highland Park ISD, which is considered a property wealthy district, only 35% is kept by the school district, with the state’s school funding formula requiring that 65% be “recaptured" by the state to be used to equalize funding for other school districts. The total amount of property taxes “recaptured” by the state is approaching $3 billion, requiring the state to put less into supporting public education. Highland Park ISD’s budget made up of tax dollars can only be used for maintenance and operations, the bulk of which goes into salaries.

Bond money raised through bond elections can only be used for capital projects such as new schools, renovations to facilities and furniture to equip those facilities and schools. Bond funds are not subject to recapture, meaning that 100% of bond funds stay in the district.

We’re not sure which study to which you are referring, however, there has been significant research to indicate that children who do not read by the end of 3rd-grade struggle later in life through underemployment and health-related issues.

Regarding how to help students learn to read, there is a body of research indicating that full-day prekindergarten (for 4-year-olds) provides children, particularly those who live in lower-income areas, the best opportunity to learn to read before the end of 3rd grade. This is why the Texas Commission on Public School Finance is likely to recommend an investment by the state of Texas in early childhood programs, particularly pre-Kindergarten.

4) Is there a minimum tax floor we could reduce the rate to and then create a special district to assess new tax or voluntary fee that avoids recapture?

There currently is no mechanism in the Texas Education Code that would allow for this to happen and, because the state has come to rely on the revenue generated through recapture, it is highly unlikely that such a proposal would be approved by state lawmakers.

Has the cost of educating each student increased at the same rate as property tax increase since 1993?

It is difficult to answer that question without taking into account a number of factors, including inflation, average teacher salaries, and enrollment. One could presume that home values and property taxes have risen at a higher rate than school budgets but all of these factors would make it difficult to conduct a straight-up comparison without conducting significant research.

If state average spending/student applied to all does that solve?

If just the General Fund is considered, holding recapture aside, HPISD spent $8,561 per student in 2016-17 (the last year for which audited financials have been submitted to TEA across the state). The average per student statewide that year was $8,486. The funding formula, however, does not factor in the cost of living due to the great disparity in teacher salaries (and all pay) in urban districts versus rural parts of the state. This is one of the reasons comparing districts is challenging. It is important to note that when gifts that flow through the general fund are held aside, our spending per student reduces $422 to $8,139 (below the state average).

5) Is there any way to “claw-back” any of the recapture funds?

Unfortunately, there aren’t any means in current law for the district to recover any of the funds lost in the recapture formula.  We will continue to work with legislators and other recapture districts to advocate for just such a change.

Why couldn’t we do a Dyslexia fundraiser to improve the program at HPISD? Would that funding be subject to Recapture?

Local fundraisers campaigns are not subject to recapture and have been helpful to our school district.  The Education Foundation, PTA’s, and other groups do a tremendous job raising money which greatly assists the district with budgetary needs. If a group wanted to have a fundraiser to assist instruction for students with Dyslexia, that could take place.

6) Is it possible to lower the district tax rate and recapture with donations from the tax savings to residents?

Unfortunately, there isn’t a way to circumvent the recapture system.  One of the issues with this idea is that the state’s funding model takes into account “local effort”, i.e. our district’s taxation level.  If a district were to lower its rate, the resulting change in funding would be substantial.

7) What is the state of Pre-K students in HPISD? How many students/what % of students are in pre-K in the district?

HPISD does not currently offer Pre-K but does have 32 students whose parents pay tuition for them to be role model students for other students in PPCD (Preschool Program for Children with Disabilities) classes. PPCD is typically a needs-based program, but the state allows districts to offer PK to students who wouldn’t otherwise qualify. Because they don’t meet the criteria for state funding, they are required to pay tuition to cover the costs of the program. These 32 students make up .5% of HPISD’s student population.