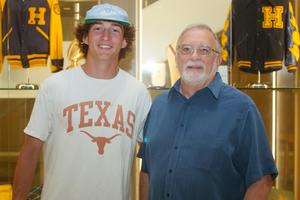 Past meets present where HPHS senior connects with alumn after breaking a 58 year track record.

HPHS senior John Rutledge won the silver medal in the boys 200 meters at the 2022 UIL 5A Track and Field State Championship Meet May 13 with a time of 20.55, breaking a nearly 60-year-old school record. It was a record that Rutledge had worked towards breaking since his junior year.

The original record was set by Class of ’65 HPHS alum and UIL State Champion George Aldredge in the comparable 220 yard dash with a time of 21.54. The two athletes met in person at the Clements Leadership Center June 9. When speaking to Aldredge, Rutledge reflected on what it meant to for him to break the long-standing record. “I’m honored to be able to break the record. It seemed so far-fetched though, something that was so hard to fathom,” he said. “I got close to it and finally broke it at the state meet, and it was such a special moment. It took a lot of hard work and determination.”

When Aldredge heard the news of his record being broken, he was surprised that it had actually taken 58 years. He acknowledged that athletes today are different than when he attended school. “I’m amazed that the record lasted as long as it did. The fact that it held for 58 years is shocking to me to say the least. An athlete today is a whole different deal than back in my day. We were casual athletes back then. I used to skip workouts back then. I think modern athletes work harder than we did.”

When asked what the secret is to being a successful athlete, Rutledge noted that, “Hard work is really the only thing that will get you further than the competition. A lot of people are given the same gifts. but people who work harder exceed past certain levels.”

“You also learn not to take anything for granted,” Aldredge added. “As easy as it was for me at times, if you get too comfortable with your natural abilities and then you lose.”