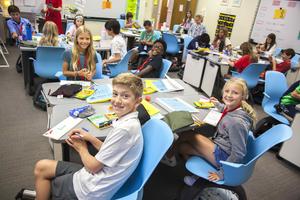 Highland Park ISD students continue to outperform students throughout the state and country, contrary to recent misleading information sent to some members of the community. HPISD’s proud tradition of excellence in academics, arts, athletics and community service for more than 100 years is why so many families choose to move to the Park Cities and data proves that the district is strong in each of these areas today.

From ACT and SAT scores that exceed state and national averages (and the gap is widening), hundreds of National Merit Semifinalists and Finalists honorees, nationally-recognized fine arts programs, 12 UIL Lone Star Cup awards (most of any high school in Texas) and a total of 123 state team championships, to state accountability ratings, assessment scores, and innovative programming like TAG, STEAM and the Moody Advanced Professional Studies (MAPS) program, HPISD’s historical data provides a clear picture that the district offers an educational foundation that leads to post-secondary success. For decades, HPISD students have outscored state and national peers on the ACT exam but the gap is now widening. In 2003, for instance, HPISD students scored 4.2 points higher than their national peers and nearly 5 points higher than students throughout the state of Texas. In 2015, HPISD scores outperformed their national and state peers by 6.4 and 6.5 points respectively. In 2021, that gap grew yet again to more than a 7 point difference.

The same trend can be seen in SAT scores. Since 2005, HPISD students have scored 200-300 points higher than other students nationally and in the state of Texas. In 2021, HPISD’s composite score was 1296, compared to the national average of 1060 and the state average of 1003. Compared to peers, a greater percentage of HPISD graduating seniors in the class of 2021 who took the SAT at any point during high school met college-ready benchmarks. Ninety (90) percent of HPISD students are college-ready compared to 35 percent of Texas students and 46 percent across the nation. HPISD students are also reaching new heights on Advanced Placement exam results. In May 2021, 1,248 Highland Park High School students completed 3,189 AP exams. The percentage of graduating seniors in the class of 2021 who scored a 3 or higher on at least one AP exam during high school increased in HPISD from 78 percent in 2020 to 84 percent in 2021.

As part of the AP exam results, the College Board has also acknowledged that HPISD has the following:

STAAR longitudinal data shows that, over time, HPISD has remained a leader in state performance. Results from the combined STAAR scores from all grade levels and content areas for the past 18 years indicate that HPISD students consistently outperform state peers by an average of 24.5 percentage points. HPISD 2021 student performance data shows HP students scored 28 percentage points above the state, six points higher than HPISD’s 2017 results. The above chart represents all STAAR scores for all grade levels and content areas.

It is common to see fluctuations in state assessment scores within grade levels and content areas from one year to the next. These changes can occur when the state adjusts either the STAAR exam or the required TEKS (Texas Essential Knowledge and Skills, which is the state curriculum). For example, the district saw a decrease in third-grade reading scores as ELA TEKS were undergoing revisions and before the new curriculum was implemented in 2019-2020.

The district carefully examined results and implemented a systemic instructional commitment in ELA that includes professional learning and job-embedded support. At the same time, it is important to note that district-wide performance was steadily increasing even with the fluctuations. Therefore, evaluating HPISD year-to-year STAAR score fluctuations can be better understood by using the state scores as a reference point.

How did the pandemic impact student performance on state and national exams?

The state of Texas noted significant declines in STAAR scores due to the pandemic while HPISD saw minimal changes. The pandemic impacted STAAR combined scores for all grade levels and content areas to decline by 17 percent across the state and 10 percent across the Dallas region. HPISD experienced a dip of only 2 percent.

The 2019-2020 school year experienced a dramatic interruption with the closure of schools in March 2020 due to the Covid-19 pandemic; no STAAR exams were given that school year. The 2020-2021 school year operated in a unique environment where small groups and other important instructional approaches were limited due to health concerns. Even with those extenuating circumstances, STAAR scores, although there was an overall decrease, showed increases in some areas. Any dips in performance were significantly smaller than those experienced in other districts.

Academic success fundamentally begins with a highly-qualified educator in the classroom. HPISD leads the state in the percentage of teachers who have earned a master’s degree. Sixty-three percent of HPISD teachers have a master’s degree, compared to the state average of 24 percent.

What about the claim that HPHS dropped in U.S. News and World Report rankings?

Highland Park High School is in the Top 250 high schools in America and in the Top 50 out of more than 1,000 Texas 9-12 schools according to the recent Best U.S. School rankings list conducted by U.S. News. The report provides data on nearly 24,000 public high schools in 50 states and the District of Columbia.

In addition to traditional high schools, the rankings encompass charter, specialized magnet, and science, technology, engineering and math-focused (STEM) schools, most of which, if not all, have strict entrance requirements, including an application process, for students to be able to attend. While HPHS is ranked #249 in the nation and #42 in Texas, a closer look at the Texas rankings reveals Highland Park High School is the first and only traditional comprehensive public high school in the state listed among the Top 47, making HP the #1 comprehensive (open enrollment/traditional neighborhood) public high school in Texas.

What about the recent rankings of HPISD elementary schools by both U.S. News and World Report and Niche?

Earlier this fall, both U.S. News and World Report and Niche released their own independent rankings of elementary schools throughout the state. While some of the ratings ranked some HP schools very favorably—and in some cases less so, HPISD approaches these with caution for many reasons.

The main reason is that criteria and methodology for ranking schools varies according to the service that is providing the ranking. This is why a school like Armstrong Elementary, which scored an A+ from Niche and is ranked 49th in the state, can be listed significantly lower by U.S. News and World Report, even though they both used test results from the exact same year (2018-2019). Armstrong received an A+ from Niche both for its academics and teachers, but a B for its student diversity, of which it has no control. The school fared lower in the U.S News and World Report ratings, largely because half of its formula emphasizes results in the context of socioeconomic demographics.

U.S. News and World Report has a lengthy description of the methodology it uses to determine its rankings:

“For each state, schools were assessed on their shares of students who were proficient or above proficient in their mathematics and reading/language arts state assessments. Half the formula was the results themselves; the other half was the results in the context of socioeconomic demographics…

U.S. News predicted each school’s mathematics and reading proficiencies using statewide, subject-specific multivariate regressions. To make predictions, these statistical models examined the extent to which schools whose students had similar socioeconomic profiles achieved proficiency in mathematics and reading. The greater an individual school’s actual value exceeds the U.S. News’ predicted value (emphasis added) up to a limit, the better it performed on the ranking factor. Likewise, the more distant a school’s actual value was below its predicted value down to a limit, the worse it performed on the ranking factor.

For the models, U.S. News used the percentages proficient in each subject as its dependent variables, and the following two independent variables: the percentage of students who received free or reduced price lunch, and the composite percentage who were among one of the underserved ethnicity groups. U.S. News chose to combine the different ethnicity groups in part to be more applicable for schools and states with mostly white and/or Asian student populations, or those that had very low representation of a single minority group.”

In other words, U.S. News uses predicted values based solely on student demographics to help determine a school’s ranking.

While methodology is important, there are other factors to consider in ranking and rating elementary school performance, making it nearly—if not completely—impossible to create a system that accurately compares schools. Certainly, HPISD congratulates our schools and others that rank highly in these rankings, but we recognize the complexity in developing a true school-to-school comparison.

Additionally, there are several schools, such as magnets and charter schools, on these lists that have strict entrance requirements that only accept students who have previously “mastered” the STAAR. HPISD is proud that each of its comprehensive elementary schools serve all students in their respective school boundaries.

HPISD could spend a lot of time analyzing these ranking systems but, in the end, because they rely on data gleaned only from one administration of the STAAR test (which has historically not been a point of emphasis in HPISD schools) taken two and a half years ago, rankings don’t influence learning or our overall approach in HPISD. What matters most is what is currently taking place in each of our schools, day after day, in every classroom, to prepare our students for post-secondary success.

What is the Lone Star Cup and why is it significant?

The Lone Star Cup from the University Interscholastic League (UIL) annually recognizes six high schools, one in each of the six UIL classifications (1A, 2A, 3A, 4A, 5A and 6A), based on their overall team achievement in UIL-sanctioned academic, athletic and music championships. Highland Park High School, which won the 2021 5A Lone Star Cup has earned this prestigious award recognizing overall school achievement 12 times, more times than any other school in UIL history.

Since the inception of the award in 1997-98, the Scots have consistently been ranked as a top-performing school in UIL academic, athletic and music competitions. The Lone Star Cup was not awarded in 2020 due to the statewide cancellation of UIL spring sports, but HPHS was in first place at the time of the cancellation.

In addition to earning the 12th overall title in 2021, HPISD has finished either first or second 19 times in the 24-year history of the Cup. Continuing to perform at such high levels is a true reflection of HPISD's tradition of excellence in all areas.