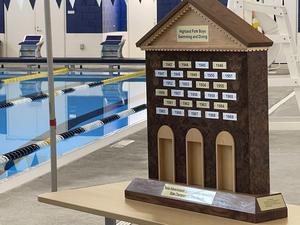 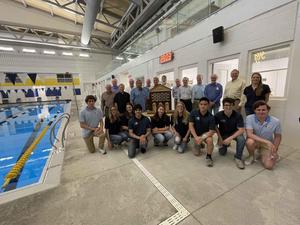 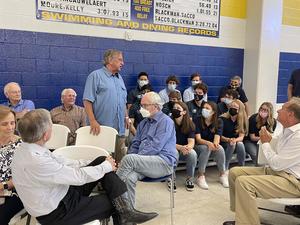 Pre-UIL swim and dive team members commissioned a trophy to honor state championships won prior to 1970.
Former Highland Park High School swimmer John Hoopingarnar ’66 organized alumni from the classes of 1943-1969 to commission a trophy to honor members of the pre-UIL era HP swimming and diving team. The 46-pound trophy is more than two feet tall and holds 27 gold and silver plates representing the first and second-place state meet finishes by the HP team at the Texas Interscholastic Swimming Coaches Association State Championship meets between 1942 to 1969. Alumni members came together in May at the new HPHS Natatorium to unveil the trophy and present it to current HPHS Blue Wave team members before placing it on display in the wall of memorabilia located in the HPISD Multi-Use Building.
“When I learned about the large trophy cases for memorabilia at the new Multi-Use Building, I thought this might be an opportunity to get a trophy made to commemorate the pre-UIL era as I knew that HP had won many state championships,” Hoopingarnar said.
“It turns out HP either won or placed second at the state meet every year from 1942 to 1969. The exception was 1943 when they did not have a state meet. What an achievement over those 27 years!”