The votes are in! Future Boone students select Bulldogs for their mascot 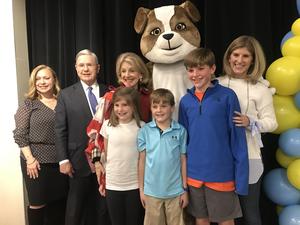 Special guests included the school’s namesake Michael M. Boone, school board members and for the first time in HPISD history, all school mascots together. During the ceremony, students answered a mascot trivia pop quiz, and the final question broke the news.


Principal Amanda Reyes asked, “On January 13, 2020, what animal was officially introduced as the mascot for Boone Elementary? Give it up for the Boone Elementary Bulldogs.” The stage curtain pulled back to reveal the campus’ new mascot and balloons with the school colors, light blue and gold. Students cheered enthusiastically as the bulldog made his way through the crowd giving high-fives and posing for pictures.


“Opening a new school is an opportunity to immediately begin building tradition, and that starts by inviting our community to engage in the process,” said Principal Reyes. In December, community members submitted 41 potential names, and those names were narrowed down to three: bears, bobcats and bulldogs. Boone Elementary will receive students from Armstrong, Hyer and University Park, and before the Winter Break, each of those students had an opportunity to cast their vote.


Boone Elementary School is the first elementary campus in HPISD to open since 1949 and the only HPISD school located in the City of Dallas. Funds to build the campus were approved by voters in the 2015 bond election. The school boasts more than 40 classrooms, pods and flexible learning spaces for each grade, a large gymnasium and a cafetorium. Last September, the Board of Trustees approved the naming of the new school after Michael M. Boone for his dedicated service to the Highland Park community as an alumnus and previous school board president.


“I hope that when you finish your time here, you have an experience that you always treasure, just as I have,” Michael M. Boone said as he offered words of encouragement to incoming Bulldogs. “I hope that you go forth to help other people with their lives in some meaningful way.”


After the reveal, future Boone families had an opportunity to purchase spirit wear featuring the school’s mascot and colors. The campus will open its doors in August for the 2020-21 school year.

View more photos from the event on the district's Flickr.