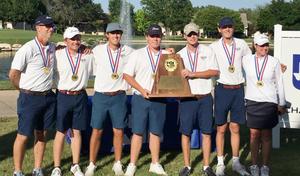 lengthy rain delay on Day Two, HP Blue held on to first place, beating second-place Boerne Champion by seven strokes. The win marks the Scots' 14th state championship in the last 20 years and a state-record 21 team championships overall.
Turner Hosch led HP Blue with a two-day score of 145 and an individual sixth-place finish. Trip Carter and Scott Roden tied for 10th place and were joined by Jack Watson and Austin Morrow on the state championship team.
"The first round was the difference in the tournament," Head Coach Jeff Loyd said. "The two-over-par total was a great score in the high winds we battled. It got really tight on the back nine on Day Two. We only had a two-shot margin with about three holes left, but the boys came through with some timely birdies down the stretch that secured the seven-shot win."
For just the fourth time in school history, two HP teams qualified to play in the tournament. HP Gold took sixth place overall at the tournament, led by sophomore Hudson Weibel who finished 17th. Christian Clark, Pierce Johnson, Hudson Weibel, Key Coker and Knox Wagoner also played for the Scots.
Click here for the complete 5A results. Go Scots!